Eggs with Chicken Livers and Prawns

Image by RitaE from Pixabay 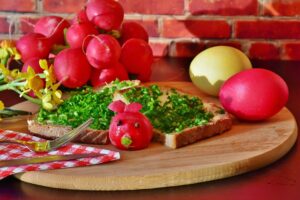 Eggs with Chicken Livers and Prawns

In a kitchen bowl we peel and grate the onion.

We scald the tomatoes with a little hot water so that they peel better, we remove the seeds and reserve their meat.

We put a saucepan with olive oil on the fire and when it is hot we add the onion and fry it.

When the onion begins to take a golden color, add the meat of the tomatoes and let it cook over low heat for a few minutes until it takes consistency.

Next we put another frying pan on the fire with oil and fry the chopped livers and the peeled prawns in it so that they take on flavor, seasoned with salt and pepper to taste.

Once everything is done we remove it from the fire.

We fry the potatoes in a kitchen pan and when they are ready we toss them into a kitchen source.

We still have to add the livers and prawns over the tomatoes and onion.

To finish we toss the livers, the prawns, the tomatoes and the onion on a kitchen source and we accompany them with the fried eggs accompanied by the potatoes.